Why does tobacco violate human rights, what should be done and who has the responsibility to act? We asked Sonja von Eichborn, the director of Unfairtobacco.

How does tobacco violate human rights?

As we all know cigarettes and other tobacco products are extremely hazardous to health and kill worldwide more than 8 million people, users and non-users, every year. Thus, the production and marketing of tobacco violates the basic human rights to life and health as the Danish Institute for Human Rights stated after conducting a human rights assessment at a tobacco corporation in 2017.

Apart from the products’ health effects, the production of cigarettes includes the violation of numerous other human rights, especially children’s and women’s rights. Tobacco cultivation is associated with poverty, low labour standards, child labour and in consequence lack of education, occupational health risks and environmental damages. These conditions and impacts are against the best interest of the child and violate the children’s rights to life, health, adequate standard of living, education, leisure, and protection from exploitation as set out in the UN Convention on the Rights of the Child. Similarily, women’s rights are violated, namely the rights to equality, education and information, safe employment, health and preventive care as well as the rural women’s right to get specific support.

Are the governments doing something to prevent and interfere in human right abuses caused by tobacco?

Well, the most important tool governments use to prevent or interfere in human rights abuses caused by tobacco is the WHO Framework Convention on Tobacco Control. But the pace in which the FCTC is implemented is too slow and governments mostly do not relate their actions to the idea of preventing human rights violations.

Especially in tobacco growing countries, governments have difficulties to act because of the economic importance of their tobacco trade. Countries like Malawi, Zambia or Zimbabwe are dependent on export trade and tobacco makes a significant proportion of their export revenues.

What should be done concerning the actual human rights violations caused by tobacco? Who has the responsibility to do that?

Let me start with responsibilities. By ratifying human rights treaties, State Parties have committed to respect, protect and fulfil human rights. This means they have the obligation not to violate human rights, to protect their population from the violation of their rights by third parties – in our case: the tobacco industry – and to fulfil the rights by taking appropriate measures which ensure that every person can enjoy his*her rights. So, governments have the duty and the right to regulate the tobacco industry as effectively as possible to protect human rights.

Concerning tobacco use there is a blueprint for action: the WHO FCTC in its entirety. The most important measures are a) regular and effective tobacco tax increases, b) a comprehensive tobacco advertising, promotion and sponsorship ban, c) introduction of pictorial warnings and plain packaging for tobacco products, d) comprehensive protection from secondhand smoke and e) targeted smoking cessation programmes.

In tobacco growing countries such as Malawi, Zambia or Zimbabwe, we have to consider the general living conditions and economic circumstances. Thus, the most important measures go beyond the tobacco sector. Nevertheless, the WHO FCTC provides two articles refering to tobacco growing. In the short term, farmers would be better off with improved occupational safety measures, e.g. training in pesticide use and adequate protective equiment during harvest (FCTC Art. 18), as well as with better prices for their tobacco. Nevertheless, in the long term and for the sake of sustainability, governments should support farmers to transition to alternative livelihoods (FCTC Art. 17), e.g. food and lifestock production.

There is a lawsuit pending against tobacco companies on behalf of tobacco farmers in Malawi (Leigh Day UK). What do you think is the reason there aren’t more similar lawsuits being filed?

Simply put: such lawsuits depend on the commitment of dedicated lawyers like in the Malawi case. Smallholder farmers do not have the means and access to human rights lawyers in order to gain proper access to jurisdiction either in their country or in the countries where tobacco corporations have their headquarters.

What could the international community do to improve the working conditions for tobacco farmers?

If governments in high-income countries are serious about their commitment to human rights and especially to combating exploitative child labour, they must advocate for mandatory human rights due diligence of (transnational) companies. This includes the introduction of domestic due diligence laws and the development of a UN Binding Treaty on transnational corporations and human rights.

Within the framework of international or bi-lateral cooperation, governments in high-income countries such as Germany should e.g. increase their support for alternative livelihoods to tobacco cultivation and financially support South-South cooperation on alternative livelihoods. Other measures include promoting occupational safety and health for smallholder farmers and strengthening farmers’ cooperatives to be able to negotiate better working conditions and prices.

How do you see the value of the WHO FCTC from the human rights perspective?

An accelerated implementation of the WHO FCTC, as outlined in SDG 3.a of the Agenda 2030, will substantially contribute to achieve the SDGs as well as to protect and fulfil human rights, children’s rights and women’s rights.

What are the factors holding back the implementation of the WHO FCTC in terms of human rights?

The biggest obstacle to speed up implementation of the WHO FCTC is the tobacco industry.

Firstly, tobacco companies have started to switch their products from combustible cigarettes to electronic devices such as e-cigarettes and heated tobacco products while keeping up their addictive potential.

Second, tobacco companies interefere in tobacco control policy making such as the recent tobacco tax increases in Germany which fail to have a health impact.

Third, tobacco companies interfere in tobacco growing countries in the Global South and depict tobacco cultivation as lucrative business for farmers while smallholder farmers have great difficulties to make their living from it. 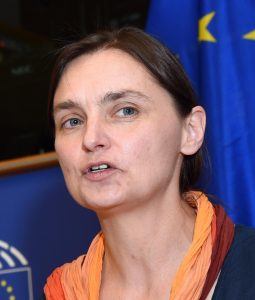